Which Tarot Deck Should I Use? 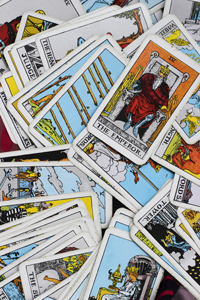 I get asked this question all the time, which is not surprising since there are hundreds of versions of the Tarot in existence. My key criteria for choosing a Tarot deck is that it should form a complete working system of symbology.

Magically, when we use the Tarot, it represents a microcosm, a smaller version of the Universe. Therefore, everything in the Universe has to be able to be represented by the cards in the deck.

There are three major magical uses for the Tarot:

1. Straight divination
2. Spell work (these decks are especially designed for spell work)
3. Working the Tree of Life (for doing a great work)

Very few Tarot decks can fulfill all three of these requirements. There are only three modern Tarot decks that I know of: the Waite-Rider, Morgan-Greer and Thoth decks. The other decks are incomplete for these endeavors. For instance the Aquarian deck is a beautiful tool for divination if you are used to working with Zen or Hindu concepts, but it's virtually useless for spell work and has no relationship at all to the Tree of Life.

Who Created These Modern Tarot Decks?
All of above-mentioned Tarot decks were created by members of the Golden Dawn. Arthur Edward Waite created the Waite-Rider deck (Rider was the name of the publisher) and Pamela Smith, also of the Golden Dawn, did the artwork for the cards.

Lloyd Morgan and William Greer disagreed with Waite's approach, arguing that the Waite-Rider deck was too austere, too mental and too intellectual. They created the Morgan/Greer deck by adding fancy symbols, such as vines, to the top half of all the cards in the Waite-Rider deck.

Aleister Crowley created the third deck, the Thoth deck, which has some notable differences. For instance, there are no Kings in the Thoth deck because Crowley felt that men never reached maturity, but were always stuck at the level of the Prince, or adolescence.

Learn More About the Tarot
Although the teachings of the Tarot were originally given orally, in more modern times people have written down some guidelines as to the meaning of the cards. However, the true use of the Tarot is to allow the cards to represent something different and specific in each reading. There is a magical ritual to "key" your deck to your energies, so that the cards will do this. To learn how to key a Tarot deck and use it so it actually does act as a microcosm of the Universe, check out our Tarot Home Study Course.

If you enjoyed this post, please consider leaving a comment or subscribing to the feed to have future articles delivered to your feed reader. Or, visit our website for more great resources.
Posted by Alan Joel at 6:00 AM
Email ThisBlogThis!Share to TwitterShare to FacebookShare to Pinterest
Labels: Aleister Crowley, magic, Morgan-Greer, spellwork, tarot decks, Thoth, tree of life, Waite-Rider