Earth's Atmosphere Gets Some Help from Magic Spells 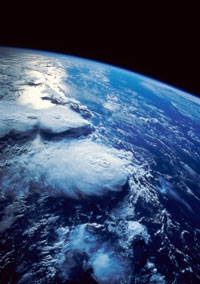 I continue to share magic spells I have created and performed to help heal the planet. This particular one concentrated on removing excess carbon monoxide from the Earth's atmosphere. I used simulacra magic for this magic spell, sometimes referred to as Voodoo magic.

I have been concerned for quite some time about the build-up of carbon monoxide, specifically over the last 20 years, in our atmosphere. According to various sources I researched, in 2009 the global average concentration was 387 parts per million and by 2012 and 2013 readings of CO2 showed these numbers increasing to 400 parts per million, the highest in the Earth's history. We can all do much to decrease our use of fossil fuels and help with this problem. But those of us in the magical community can do more using magic spells.

Here's what I've done. I set up a keyed plate (magical tool for Earth element) with a small round simulacrum of the Earth. Also in my set-up on the plate is a pendant of a crescent moon and a funnel with one side coming off the Earth object and pointing towards the moon pendant. This design is intended to remove not only carbon monoxide, but also 40 poisonous chemicals from the Earth's atmosphere and send it to the moon. Since the moon is building its own atmosphere, these chemicals that are harmful to our atmosphere and the destruction of the ozone layer, will be helpful there. I then launched the spell reading the verses, placed the written verses on the plate and covered the plate with a keyed chalice (magical tool for Water element). Of course this is not a "quick fix" magic spell. Spells on the world level especially cleaning up "messes" can take time and this one is ongoing since any CO2 funneled out is quickly replaced by societies so dependent on fossil fuels.

If you are already following a magical practice, I encourage you to also use your magical abilities to help heal the planet with magic spells. If you do not have a magical practice, it's never too late to start developing one. We have plenty of resources on our website to help you get started. At the very least, find one intentional act you can personally do to reduce your use of fossil fuel and do it. Your one intentional act becomes an act of power and of magic and it adds to the healing energy. Together, through magic, we CAN heal the planet.

Magic To Heal the Planet

Through our school, we have done so many spells and magical procedures to work on different aspects of healing the planet and I am having so much fun re-living past spells performed, that I want to share a few more with you all. This one was quite intense and should only be performed only by a practitioner with a lot of experience. It happened not too long ago and you may even remember stories reported in the media about 2 large bodies (reported by some to be comets and as asteroids) that were discovered as they passed between the Moon and the Sun. They were reported to be the force behind a large earthquake or tsunami in Japan that did quite a bit of damage. The course projected for these objects indicated that they would hit the Earth and major damage would result. Here is how I dealt with this situation.

My research showed that these two bodies were Blue Star Kachina and Red Star Kachina. I called upon an ancient Navajo archetype, Monster Slayer to help. I constructed an anchor for the archetype using a large obsidian hatchet and spear. In a full cast circle with a doorway cut in, I used the magical tool, the black mirror, and pulled this archetype out of the spirit world and set it on the anchor. Verses had been written ahead of time enlisting Monster Slayer's help in the destruction of these two bodies. After anchoring the archetype on the spear and hatchet setup, I went outside through the doorway in the full cast circle with the spear at night. As my partner read the verses, I held the spear upon my shoulder and then threw the spear up into the night sky. We saw what looked like a large streak of ravens taking off from it.

It took three days for these bodies to be destroyed. We first heard a report that the Blue Star Kachina being tracked by scientists just disappeared. The Red Star Kachina was then reported to break up into pieces, most of which went off into space harmlessly. One large piece did come into our atmosphere leaving a visible trail seen by many people reported to be about 6 feet wide. It came down in the southern part of the United States but no damage was done.

With all our planet gives to us, isn't it time to give some back? Even if you aren't at a magical level to be able to work with archetypes such as Monster Slayer and destroy potentially disastrous threats, you can do your part to magically heal the planet. Something as simple as picking up trash in a park or consciously making an effort to recycle can all help heal the planet. Remember any act done with intention is a magical act. So set your intention to do something to heal the planet and join us along with all the other magical people striving to give back to Earth Mother.

No one can deny that there is a lot of healing that would be helpful in our current world situation in many areas and as magical practitioners, we know magic spells can help with this healing. People are often overwhelmed at all they see and feel needs changing in the world and wonder if magic spells can help and if so, then why aren't we doing something to "fix" things. The simple answer to this is yes, magic spells can help and we are doing something about it. There are so many directions this could lead from political unrest, and war to planetary changes such as global warming to hunger and disease and the list goes on. With such a long list, we must prioritize however. It's not like with real magic, we can just wave a magic wand and have everything change at once. Whereas we are sure there are others who practice magic that are also involved in world level magic spells, there is still a lot to do. We do feel an obligation to use our knowledge for a higher good, do pick out particular issues to work on and would like to share with you one of the projects our school founders have embarked on.

Simulacra or VooDoo Magic
This is a World level spell created to clear all our oceans, seas, rivers, lakes and streams of pollution. It is ongoing and was created using simulacra magic. Some refer to this as Voodoo and you can learn more about it in our How To Do Voodoo ebook. Basically this type of magic involves using an object that is a likeness of something else, keying that object to what you want to have an effect upon or who you want to have an effect upon and then whatever you do to the simulacrum also affects the person or thing. According to the Law of Similarity, the greater the likeness between a simulacrum and that to which the simulacrum is keyed, the greater the psychic connection will be.

Setting Up The Spell
For this particular spell, here is the simulacra that were set up. First a fountain in the shape of a clam shell was used. It is a bluish-gray color. Where the water flows out of the fountain is a pair of dolphins. The fountain was put through a 4 Element cleansing and it was keyed. It was then placed on a stand that has staggered tiers. On a lower tier, a globe of the Earth on a wooden base was placed (it too being subjected to a cleansing of course). All of this was then placed on a sun yellow colored square plate. The plate was keyed in the way that you would for a plate being used as the tool associated with the element Earth. Rounded glass-like pebbles collected on a beach were placed on an 18 by 2 inch stick which was placed East to West just under the globe. Those of you involved with magical practices will be aware of some of the planning that went into this setup in terms of colors used, materials used and symbols to bring in various elemental influences.

The next step involved filling a one ounce dropper bottle with bleach. This is was chosen because bleach prevents algae build up in the fountain. The liquid in the bottle was labeled as "Ocean, Sea, Lake, River, Stream Cleansing Agent". The bottle was put on a plate (the tool for the Earth element) and the bottle keyed. Verses were written that included a set time for the spell to work, pulled and gathered energy from the Old Ones, the Winds, other beings in the Hierarchy and all those who care about the health and vitality of our waters.

Every day, the fountain is topped off with water and a dropper full of the cleansing solution simulacrum is added. This spell is ongoing and is granted an ambitious one. It is one of the many spells we have undertaken to help heal the planet. Presented here is of course an abbreviated version of all that was entailed in the designing and implementation of this spell just to give you an idea of how simulacra or VooDoo magic works. There are other steps from creating directors and limiters, checking things out with Tarot readings to consulting higher powers and revising spell verses, that also have to occur in the process. It is a lot of work, but one that we find rewarding and that we feel is important.

This is just one of the many projects we have undertaken as magical practitioners to help in healing the planet. Now it's our turn to ask you, what are you doing?

Posted by Alan Joel at 7:55 AM No comments:
Email ThisBlogThis!Share to TwitterShare to FacebookShare to Pinterest
Labels: heal the planet, healing the planet, how to do Voodoo, magic for healing the planet, magic spells, simulacra, voodoo magic, world level magic
Newer Posts Older Posts Home
Subscribe to: Posts (Atom)