Pendulum Divination Part III: How to Clear Daily Hassles with Your Pendulum

Pendulum Divination: To Clear or Not To Clear
First you need to determine if the situation is one that you should clear. It could be that there is a life lesson that is very important for you to learn and that is why the situation exists. By consulting the pendulum you are accessing information from higher powers that can see the overall picture and let you know if this situation should be cleared or not. To do this let your pendulum hang from your dominant hand while you visualize the problem you want to clear. Then ask your pendulum, "Can I, may I, should I clear this situation?" If you get a yes answer, proceed to the clearing. Here's how.

3. Once the pendulum stops swinging in the counter clockwise direction on its own, then the hassle is cleared.

Pendulum Divination: Moving On
Of course once your problem or hassle is cleared you can always bring it back by worrying about it too much. To keep this from happening, trust your pendulum divination and clearing and your intent and switch your focus to something else. In other words, let it go and move on to other things in your life.

You can use this same technique to clear repetitive thoughts that you are having. Just hold the repetitive thought in your mind instead of visualizing a situation and ask the pendulum to clear the thought from your life. It may not go away completely at first, but will come less and less often until after a time it does go away.

Now that you know how to make a pendulum, train it and clear hassles from your life with it, find out more ways to use pendulum divination in our Kindle book Learn How to Do Witchcraft Rituals and Spells with Magical Tools and continue your journey into pendulum divination magic.

Posted by Alan Joel at 6:00 AM No comments:
Email ThisBlogThis!Share to TwitterShare to FacebookShare to Pinterest
Labels: pendulum divination

Pendulum Divination Part II: How to Train Your Pendulum 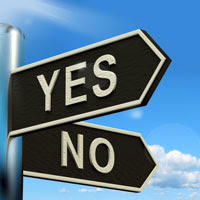 Pendulum Divination: Cleansing the Pendulum
First you must cleanse your new pendulum with smoke from a charged cedar or sage smudge stick. To charge your smudge stick, sit in the South facing North. Use paper or wooden matches to light the stick. Once it is producing a thick, dense column of smoke say the following verse in a voice of command:

"Fire and Air where you are cast,
Let no spell nor adverse purpose last,
Not in accord with me!
Cleanse this tool and cleanse its space,
Far from here send baneful trace!"

Pendulum Divination: Keying the Pendulum
The next step is to key your pendulum to your own energies. To do this hold it in your dominant hand. This would be the hand that you would naturally point with. Flow energy into the pendulum for a minute or two. You will know it is keyed when it feels warm and tingly.

Pendulum Divination: Training the Pendulum
The first step in the actual training of your pendulum is to establish the direction it will swing for the answer "yes" and for the answer "no". Decide if "yes" will be an up/down swing or a left/right swing. Whichever you decide for "yes" the opposite swing will be "no".

Sit in a comfortable position and hold your pendulum hanging from your dominant hand. The chain or string it is on must be long enough for it to swing freely. Place your elbows on a table or your knee to stabilize your hand.

Now swing the pendulum gently in a clockwise circle and say out loud, "Show me yes." Wait until the pendulum stops moving in a circle and begins to swing back and forth in the direction you picked to designate "yes". If it doesn't, then ask again. Once it is swinging in the selected direction consistently, do this step again asking for it to show you the direction for "no".

Pendulum Divination: Practice Getting Answers From Your Pendulum
You can now continue the training by moving into asking simple yes/no questions about future events that you can easily verify within 15 – 30 minutes. For example you might ask, "Will my friend Ann call me in the next 20 minutes?" Wait and verify the answer the pendulum gives you, then ask another question.

Remember that you are in the stage of training your pendulum at this point so don't get too caught up in whether the answers given are correct or not. The more you do pendulum divination, the more accurate your pendulum will become. Just keep asking those yes/no questions that can be verified within a short time period until you start seeing consistently accurate answers.

The next article in this series will cover how to clear out daily hassles with your pendulum, so stay tuned. If you just can't wait, you can find all this material on pendulums in our Kindle book entitled, Learn How to Do Witchcraft Rituals and Spells with Magical Tools. And remember you can read Kindle books on your regular computer or Smart Phone if you don't have a Kindle.

Have you noticed lately how things in the world are strange, funky, and otherwise just plain hinky? Maybe you are suddenly accident-prone or suffering from strange new health problems. Or maybe business has suddenly taken a funny turn. Perhaps relationships that have been solid for years are all of sudden on the fritz.

So what in the heck is going on here? After all, 2012 is over... it is supposed to be smooth sailing from here on out, right? Maybe, or maybe not.

What Didn't Happen in 2012
Contrary to many popular predictions, the world didn't end in 2012. Neither California nor Florida floated away. The South and North poles did not change positions. The Earth suffered some strange effects and disasters, but nothing compared to a true pole shift.

Instead, the people on the planet are the ones who experienced the pole shift--some more dramatically than others. For some of this, our true North suddenly became South. I saw this happen in my wife's life. She has been dedicated to the art of horsemanship since the age of four. She would ride any horse, nag, pony, or wild beast offered to her. Her dream was to eventually jump a horse in double clear rounds at the Grand Prix level.

All good. Then she suffered a number of accidents, some on horses and some through various life events, and that desire is gone. She, an avid collector of horses and horse projects, has suddenly reduced her usual gaggle of horses to one mare. She may eventually go back to the dream of riding at the Grand Prix level, but for now, her focus has completely shifted to other goals. The Grand Prix dream, which used to be her true North, has suddenly shifted to the South pole. Just like that, in the snap of a finger. Boom.

So while the Earth didn't suffer a total pole shift, many people, like my wife, have suddenly found their own personal poles shifted... seemingly without any warning.

What's Happening with Magic 2013?
So if you are a practitioner of the magical arts, how do you make sense of the hinky happenings this year? If you have experienced your own pole shift--or even series of pole shifts--how do you cope? What kind of magic can you do to lessen the impact on your life?

Well, first let's take a look at what's going this year. I would best describe the planetary happenings with the phrase, "As the world wobbles." This is partly, of course, a play on the daytime soap opera "As The World Turns."

The world is certainly still turning in orbit, thank goodness, but there's a very slight wobble going on as the planet circles around in that orbit. A slight wobble you say? Not a major wobble? Yes, a slight wobble. For the planet, the wobble is very slight, but for us humans, every tiny tremor in the planet can be felt as a major life shift, or perhaps as a continuous chain of minor inconveniences that stack up into a major headache.

For instance, one person reports a chain of small events that has stacked up into a major debt: a car malfunction, a not-too-major health issue, a tiff with a client, a sick pet, and minor house repair. Taken separately, these issues are not major, and this person would easily be able to handle them. But the problem is that they all occurred in a span of two weeks. Compressed into that time frame, this person is about to pull his hair out (what little hair is left, that is!). Now that is an example of the world experiencing a tiny wobble as it circles the sun.

In the other instance, a person can feel the world wobbling as a single major event that absolutely changes North and South poles, as discussed above. In the cases of these personal pole shifts, the severity can range from a lifetime interest in something simply disappearing to a life-threatening illness that leaves one teetering on the edge of life and death.

So what's a person to do as the world wobbles? Let's take a look at what kinds of magic are most beneficial in 2013.

How to Use Magic 2013
As you may have already figured out, Magic 2013 is about expecting the unexpected. That means being prepared, and having your magical toolbox fully stocked and ready to go at all times.

Next, adaptation is key. We have a phrase that we use often in our school (thanks to my teacher George Dew) called "cut and fit." Cut and fit is exactly what it sounds like. It means that you have to be able to look at the situation in front of you, rummage around in your magical toolbox, and come up with the right combination of tools that will solve the problem. The key is that the tools you use may or may not have originally been intended for the purpose to which you are now applying them. Nope. Magic 2013 calls for creativity, ingenuity, and the ability to shape your knowledge and experience in new ways to fit the new world--and its wobbles.

Then there's your perspective as you look at your life and any new situations that may have cropped up. You may need to adopt some new "rules" or paradigms in your life to cope with the strange events that appear. Here are some examples that may help:

Sound good? Need more help? Check out our selection of ebooks and homestudy courses or Kindle books for specific ideas on how you can deal with your life as the world wobbles!