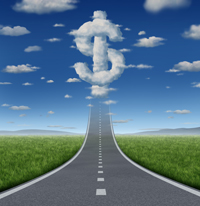 If you are a fan of the TV show "Once Upon a Time", then you are familiar with the characters often stating that magic comes with a price. They are more often than not referring to the fact that you have to be careful what you ask for so that you don't receive some type of backlash for breaking Universal laws that govern magical practice. This applies too in the real world of real magic. In the world of real magic, many people also believe magic must come with a price and that there must be some type of payment to compensate the Universe for it to work on our manifestations. Since we live on a planet where virtually nothing is free, our minds tell us that the Universe must demand a price for the gifts and benefits it bestows on us. When it comes to getting something we want, our minds follow this thought process:

The Nothing Is Free Mentality
The truth is that the Universe doesn't work that way and does not demand a price from us. The Universe and its angelic and other spiritual helpers operates on a larger and grander scale than we do on Earth. What we consider a miracle is just an everyday occurrence to them. It doesn't consider demanding a price from us anymore than we would demand a price for holding a door open for someone with their hands full of packages. Most humans though continue to believe that the Universe must extract a price for miracles it delivers. Think about someone who bargains with their Higher Power making promises of what they will do or not do if he/she will just deliver a certain miracle or manifestation. Overcoming this belief is not an easy undertaking, so the alternative we suggest is to go around the belief instead.

1. Money - The price doesn't have to be money. The Universe doesn't really have any use for money. That is a human concept. Your price could involve money if you wanted to donate to charity or something along that line, but it does not HAVE to be money and may be best if it is not. Just the mere mention of money often makes people feel anxious, stressed, angry, regretful or a slew of other negative type emotions. For that reason it is probably best just to keep money out of it.

2. Sacrifice – You could pick a price that includes sacrificing something you don't really need. That could mean getting rid of possessions which could create more sacred space in your life or it could mean getting rid of emotional states like anger, impatience, doubt, fear or any type of negative energies that interfere with your life. The same could apply to negative thoughts that you continually have. Sacrificing a thought means replacing it with something else. Instead of allowing your mind to repeat negative thoughts over and over, stop and change to a positive thought. Sometimes this process means you have to just start with a simple "I am willing to be willing to think a more positive thought" instead of jumping right to the positive thought itself. The same process works for dealing with negative emotions.

3. Mutual Benefit – You could pick a price that will have benefit for you and for another person by being of service to them. This "paying it forward" philosophy can have a lot of great benefits and satisfy your mind by letting it believe you have made your payment and are now ready and deserving to receive your gift from the Universe. Acts of service could be those where you do something for someone and you don't tell anyone what you have done or that you have done anything at all. It doesn't have to be a big thing that you do however. It could be that you send blessings to someone you pass on the street that looks like they are having a bad day. Maybe you just hold the door for someone else or give them a flower from your garden. It could be even something as simple as letting a comment go by that you would normally argue with or taking off work early to spend some extra time with your family.

It doesn't matter what price you select, large or small, because after all it is your choice. You don't want to make a price so high that you avoid it or it sets you up for failure, so give a little thought to what is reasonable and that you will feel satisfied with. Remember it's all for you because the Universe really doesn't demand the price. No matter what you pick, if it helps put you in a better space for being able to receive from the Universe then the price is well worth it.