Giving Thanks is a Gift to Ourselves 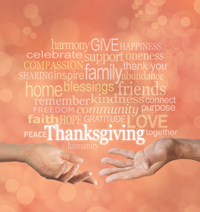 In this society, giving thanks has come to mean something different than it originally did in tribal cultures. Today, when we thank people it's either a perfunctory gesture of politeness, or it implies some sort of obligation.

In the first case, saying "thank you" is just a polite way to end an interaction. In the second case, when someone has done something for us and we thank them, we often walk away with a feeling of obligation. In other words, we keep running mental accounts of who has done what for whom, and what we now owe. Saying "thank you" often goes along with making another mark in the account.

Because higher powers and beings (gods, goddesses, deities, angels, etc.) are by nature "higher" in the spiritual hierarchy than we are, we can't actually "do" anything for them except appreciate them. Their actions on our behalf and our expression of thanks fall under the Law of Reciprocal Maintenance. We are each doing the appropriate part.

Higher powers and beings need us because we are part of the hierarchy, without which they cannot exist. But these beings don't need us to do anything for them, simply acknowledge and appreciate their presence. The Hopis say that our job is to "send a joyous note to Creator's ear."

In this season of giving thanks, you might ask yourself what you have to be thankful for in your life, and how you might sound a joyous note in Creator's ear. When we are joyful and express that joy, higher powers and beings send more of the same good "stuff" into our lives. Appreciation begets more to be appreciative of -- it's a wonderful self-fulfilling cycle.

Here's the other fascinating part of giving thanks: you can actually give thanks for something that you want but don't yet have, and higher powers and beings will send it to you. Giving thanks actually works better before you have what you seek -- it brings what you seek to you even faster.

Now you're ready for Thanksgiving! In addition to feasting on a wondrous dinner, take a little time to sound your note of joy to the Universe. It will come back to you like a boomerang, tenfold!

Posted by Alan Joel at 6:00 AM
Email ThisBlogThis!Share to TwitterShare to FacebookShare to Pinterest
Labels: giving thanks, hierarchy, thanks, Thanksgiving