The Science Behind "The Secret" 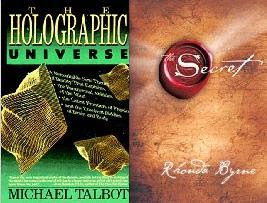 I understand all of these reactions. Having read and watched "The Secret," I see how the information contained therein is both insightful and also far too vague to be of use to many people, especially the skeptics. The material presented is familiar ground to people who already believe, and is still "pie in the sky" to people who have never believed. So "The Secret" is very much preaching to the choir.

For those who find this material unbearably vague or totally unbelievable, I suggest a different book: "The Holographic Universe" by Michael Talbot. Talbot ties science with mysticism in this wonderful work, and proposes that the Universe is entirely a hologram. His model encompasses both the new findings of physics and many questions that relate to magic and mind-body connections.

Can You Chop a Salamander's Brain and Still Make it Work?
To back up some of his amazing theories, Talbot cites numerous scientific studies and experiments. The one that so fascinates me is the one where scientists literally removed, sliced-and-diced, and then replaced the brain of a salamander. Amazingly enough, the salamander functioned just fine with his new sliced-and-diced brain, indicating what we have often postulated-that the brain is the analog of the mind, but is not the mind itself. The mind exists somewhere outside the body, yet uses the brain to convey many of its signals and messages.

In any case, the book is a totally worthy read and an excellent source for those who are doubting Thomases. It is chock-full of science and other objective goodies, so read on ... or buy it for your favorite skeptic this holiday season!

If you enjoyed this post, please consider leaving a comment or subscribing to the feed to have future articles delivered to your feed reader.
Posted by Alan Joel at 3:00 AM
Email ThisBlogThis!Share to TwitterShare to FacebookShare to Pinterest
Labels: Holographic Universe, Michael Talbot, The Secret