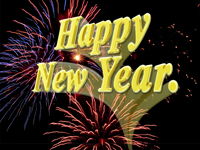 Thus the fastest way to change your life is to raise your level of Being. The higher your level of Being, the higher will be the things you attract into your life: a higher salary, a higher caliber of people around you, a better level of health, a higher feeling of satisfaction with your life. Instead of just trying to change one thing in your life with a New Year's resolution, wouldn't it be so much more fun to play with a magickal yearly aim that requires less work and produces better results in every area of your life?

What's a Magickal Yearly Aim?
A magickal yearly aim is a magickal exercise of your choosing that you practice all year long. The goal of this magickal yearly aim is to identify and dissolve the resistance in your Being that causes you to think, act, and do in ways that detract from your life. For instance, suppose you find that the people around you at work are not as kind, giving, warm, and caring as you might like. In fact, suppose that you find these people downright mean or overly competitive. This kind of cutthroat behavior may just be part of the company culture. That culture existed before you were hired, and has never changed since you've been an employee. What if you could use a teeny-tiny magkical yearly aim to change the way people around you behave?

An Example of a Magickal Yearly Aim
One of our students made that very change with a magickal yearly aim that was so simple as to be absurd. His aim was to remind himself daily of this fact: "Gratitude is free." Then he would find some way to express his gratitude or caring, no matter how tiny that expression. Since he was uncomfortable, at first, with changing his behavior at work, fearing that people would find his behavior odd and suspicious, he began with something less obvious. Each day, he would remind himself that gratitude was free, and then he would do a kind act for a stranger. More importantly, he would tell no one of his kind act. Some of his kind acts included:


As you can see, these acts ran from the obvious to the "pay it forward variety." All these acts centered around the fact that he was grateful for all he had in life (though he still wished for more, such as a caring work environment), and he wished to share it with his fellow humans. After our student practiced his free gratitude on strangers for a few months, he was able to gradually practice his yearly magickal aim at work. Again, his gratitude was expressed simply. He would:


As he began modeling gratitude, slowly he began to feel happier regardless of how the people around him acted. Even in the face of overly-competitive behavior, he offered gratitude. This gratitude in no way reduced his level of performance or his steps towards his goals at work, but all of his work was done with a smile and a feeling of warmth. Eventually, over a period of nine months or so, his co-workers began to change. A little at a time, the people around him smiled more. He sometimes was the recipient of a free cup of coffee. His workload became easier to bear, and his yearly reviews were much less of a trial. His promotion also came sooner than he had thought possible.

Gratitude is a Higher Level of Being
Some scientists have studied the various parts of our physical body, such as blood pressure and heart rate, and found that people who are happier are also healthier. Studies also show that emotions such as gratitude, love, caring, and faith have a higher vibrational frequency than emotions such as sadness, depression, hatred, and fear. While this may seem self-evident, many of us don't make use of this knowledge. But since we know that New Year's resolutions quickly fail for most people, wouldn't it be so much easier to use a simple exercise that helps us practice a magickal yearly aim? If you could raise every aspect of your life just by doing one kind act for a stranger each day, wouldn't it be worth it?

As with our student, you can identify a part of your Being or your life that has a great deal of resistance. Then create a simple magickal exercise as part of your yearly aim to address that resistance. The exercise should be small, simple, and easy to remember. Here are some ideas to get you started: