"If we could read the secret history of our enemies, we should find in each man's life sorrow and suffering enough to disarm all hostility." -- Henry Wadsworth Longfellow 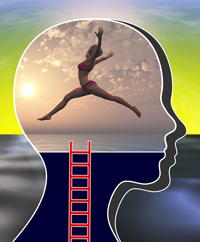 Anyone who has ever felt unfairly treated by another surely knows the feeling of righteous indignation. Taken one step further, continued feelings of injustice can lead to thoughts of vengeance upon others considered to be "the enemy." And while a person might find some sense of satisfaction in being "right" and feeling superior over an enemy, that same person also loses any freedom of thought, feeling, and being to that same enemy. Added up over time, the sum of these moments of righteousness AND loss produce, in sum, the fact that the enemy has in fact won... without ever lifting a finger.

Have you ever felt that sense of righteousness that comes from retelling an event in which you were treated unfairly? Have you ever thought of what you would say to your enemy the next time you see him or her? Have you dreamed of alternate scenarios in which you emerge victorious over the person who has wronged you?

If so, then you know the power of righteous indignation. It can rule your life without ever changing anything that happens "out there"... where your "enemy" lives. All those moments spent thinking about vengeance, all those dreams wasted on recreating scenarios... all of these are moments in which you sacrifice your own freedom in the name of your enemy. The true injustice of the situation is that your enemy likely has no clue that you are offering up so many moments of your life in sacrifice to him or her.

But even when we realize that the continuous thinking and talking about "the enemy" is really nothing more than an energy drain that binds us to the same "stuck" place on our spiritual path, most of us have real trouble letting go. The injustices feel too deep to just release without some sort of satisfaction. Plus, how can we pardon such bad behavior by others, and allow them to carry on without some kind of retribution?

If the quote by Longfellow at the beginning of this post be true, then it must also be true that the enemy has also paid his or her dues in sorrow and suffering. Maybe the enemy has not offered those dues to you, the quote does give us a glimpse of the idea that all humans have suffering and sorrow in equal measure. Could this be true?

Discovering Secret Histories
While your sworn enemy is not likely to tell you about his or her suffering, you can still discover the power of secret histories by talking to others. Choose the most successful person you know, and ask that person about what events have most powerfully shaped that person's life. Ask about that person's regrets, sorrows, and hard times. A truly successful person will have many, and those who admit to those moments of sorrow will be glad to share them with you.

For instance, one woman interviewed the most successful person in her life. Prior to the interview, she saw this man as a wealthy entrepreneur who had financial freedom, famous friends, and a "good life." She judged this based on the property he owned, the pictures of him with famous people, and the seemingly loving wife and family.

Imagine this woman's shock when she discovered that this successful entrepreneur often felt lonely and sad. When pressed, the man said that he had a heart condition that was kept secret from all but his family. His family was so busy jet setting around the world that this man hardly saw them. He had no close friends, and he missed the light-hearted friendships of his childhood. Indeed, his wealth and fame made it difficult for this man to distinguish between people who truly were his friends and people who only wanted a piece of his fortune. Thus he had no close friends, and he was saddened to see his family struggling with the same issues.

While the woman had previously judged this man only by his outer trappings of wealth and fame, she realized that she was happier than he, despite having far less means. She had close friends and a warm, loving family that gathered for merriment and laughter during holidays. When she realized just how much this man suffered despite his wealth and fame, or because of it, she instantly realized that anyone could have secret histories that were full of sorrow and suffering. Even her worst enemy probably had a secret history.

If you want to discover your enemy's secret history, or reveal your own secret history to your enemy without actually telling him or her, consider using Spirit-to-Spirit communication via a magickal waterbowl. You can learn more about this magickal technique from this blog article or our Psychic Development ebook and our Kindle book Learn How to Do Witchcraft Rituals and Spells with Your Bare Hands have instructions along with other ways to use a magickal waterbowl such as to find lost objects, look into the future, and to balance your water energies.