Personality and the Dark Side of the Moon 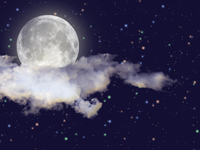 Most people are pretty familiar with the zodiac sun signs. When someone says they are a Sagittarius, it's a pretty good bet that they love to travel and they have enough curiosity for ten cats. The sun sign part of a person's personality is the easy part.

The part that's harder to fathom is the hidden side of the personality, the darker side, the side that is defined by a person's moon phase.

Luckily, it is possible to calculate your own moon phase. The best resource for that is the book "Phases of the Moon" by Richard Elizabeth. In his book he gives a formula for calculating your own moon phase. Yeats' work on moon phases is far more esoteric, and less likely to be understood by the modern generation.

What Your Moon Phase Will Tell You about You
Your moon phase explains all those things that you can't explain about yourself. It often brings to light the reason for inexplicable desires, afflictions, fears, habits, and behaviors. One's moon phase can also explain the role one plays in one's family or in relationships.

For instance, my wife's sun sign is Aquarius. The obvious qualities of Aquarians are loyalty, humanitarianism, free-thinking, intelligence, and highly inventive. They can also be rebellious, changeable, and possessed of extraordinarily long memories. No problems there. She fits all of those characteristics.

Moon Phases Explain Extremes of Personality
However, she can also take rebelliousness to an art form at times. She has been known to go where angels fear to tread when it comes to cultural and family issues, and her personality goes far beyond changeable. It's very often downright turbulent. And she's got ambition to spare. That's where her moon phase comes in.

She is Phase 10, also known as "the image breaker." This phase is one of the most turbulent of all 28 phases of the moon, so it's no surprise that my wife has a turbulent personality. She has been known to scare people even when she's smiling cheerfully.

In addition, Phase 10 is one of the most ambitious phases when it comes to self-growth and spiritual evolution. Finally, Phase 10 is all about being "a purging force to destroy and replace obsolete forms of every conceivable variety-from outdated laws to old buildings to antiquated traditions," to quote Richard Elizabeth. No wonder she charges in to break up old cultural archetypes when others would run.

My own moon phase, the Fool, is equally enlightening. You will probably find yours to be as well. Note that your moon phase, as referred to in this article, is different from that calculated by most "moon phase calculators" online. I wish I could find an accurate online resource for this, but Richard Elizabeth's book or "A Vision" by William Butler Yeats are the best sources I have found for this.

If you're interested in discovering more about the darker, less rational, yet no less powerful side of your personality, it might be time to explore your moon phase.

Posted by Alan Joel at 8:00 AM
Email ThisBlogThis!Share to TwitterShare to FacebookShare to Pinterest
Labels: dark side of personality, dark side of the moon, moon phase, personality