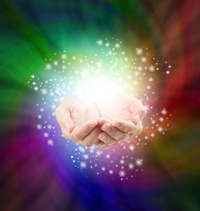 Winston Churchill was well known for saying "Never complain, never explain," and when it comes to building force and strength in your magical practice, Churchill had the right equation.

People contact us all the time asking about how they can cast stronger magic spells. Sometimes they complain that their spells had no effect.

Sometimes the effect was less than expected. And sometimes a spell that didn't work so well for one person worked great for another.

So what's the difference?

Sources of Force in Casting Stronger Magic Spells
When you get right down to it, a spell is nothing more than a formalized intention supported by any powers and beings you might invite to help. A spell is the formalization of your own intention ... your desire to create a specific effect in the world.

Does a spell have power in and of itself? Yes. A spell has many sources of power outside of your own desire and force, including:

- higher powers and beings that respond to magic
- the force of magical practitioners who have used the spell before
- the power sound, as found in litanies, chants, and drumming
- the strength of any keyed magical tools used during the spell
- the force of symbols, which are doorways to actual sources of power
- and so forth ...

Building Your Own Force to Cast Strong Magic Spells
There are many magic rituals that can help you build force, and almost any positive magic ritual done on a CONSISTENT basis will increase your force. But going back to Winston Churchill's quote of "never complain, never explain," I have to say that this is one of my favorite ways to increase inner force. Magically, it makes sense. Here's why.

Never Complain
Complaining, as you have probably already experienced, puts you in a negative state of being. While you may feel better in the moment, as you complain, what you are actually doing is spending focused time manifesting what you don't want (i.e., whatever you are complaining about). So stop complaining already.

Actually, quitting the habit of complaining can be almost as difficult as kicking a smoking habit or any other addiction. So here are three tips that might help:

1. Even if you are complaining and nattering to yourself inside, do everything in your power not to express the complaint outwardly. Outer silence comes before inner silence.

2. If you really need to vent, give yourself five minutes a day and let it all hang out. Write it down in a journal or call a good friend. Then, let 'er rip. The rest of the day, don't complain.

3. To quiet either inner or outer complaint, when you feel the urge, tell yourself, "I'll let myself complain in five minutes." Five minutes later, tell yourself the same thing. This technique is known to work well for both smokers and complainers.

If you limit complaining for 40 days, you'll be amazed at how much your inner force increases, which will have a positive effect not just in terms of casting magic spells, but also in terms of improving your life overall. Well, duh, right? But it had to be said.

Never Explain
This is the part where most magical practitioners lose the most force. There is always the temptation to "explain" what we are doing and why to other people, for a variety of reasons.

Many of us just like to feel like we are not alone on the journey, so there's the temptation to explain our magic to friends who are not magical practitioners. Other times, we might feel the need to show off or demonstrate our powers, especially when challenged by non-believers.

Whatever the reason, explaining the use of magic goes against one of the primary Rules of the Road (the universal laws that govern magical practice). Created by George Dew, these rules hold true whether you believe them or not. The one that specifically applies to the "never explain" clause is this one:

"Never use magic for show, pride, or vainglory. Using magic to show off, to prove a point, or from a place of injured pride usually results in side-bands (undesirable side effects) to the operation that will bring very undesirable backlash from the Universe."

So even if you feel sorely tempted, never explain your magic, don't. In esoteric practice, there is something called the "hermetic seal." This seal refers to the practice of keeping certain aspects of your magical practice compartmentalized, away from public view.

While we definitely believe that certain magic rituals should be integrated into daily life, such as the Navajo Beauty Way, if you want to increase your force as a magical practitioner, keep a hermetic seal around most of your magical practice, especially spell work. In other words, if you want to cast stronger magic spells, keep your mouth shut about it.

I have no idea whether Winston Churchill practiced any form of magic or not, but the guy hit the nail on the head when he said "Never complain, never explain." To increase the force of your magic spells, try following this dictum for 40 days or so. If you manage it, even partly, you'll be both pleased and surprised by the result!