The Tower Card in Tarot Readings - What It Means 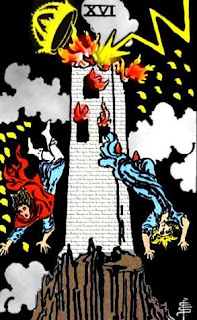 Recently I did a Tarot reading for a client who has been having a lot of trouble with accidents, like fender benders and such. This client was so banged-up and bruised from all of his recent misfortunes that he asked for a reading to find out what was going on.

Not surprisingly, in both the present-time and progressed Tarot readings for this client, the Tower card showed up, both times upright. A lot of practitioners of magic shudder when they see the Tower card because they think it automatically means chaos. It does, sort of, but it means something more specific than that.

The Tower card talks about complete material disorganization or chaos, caused by spiritual forces beyond one's control. The world is obviously experiencing a lot of chaos and change right now, as we approach the end of a cycle on the Mayan calendar and prepare to enter the next. The Tower card talks about chaos coming into people's life from the outer world. As you can see on the card itself, the lightning comes into the picture from the outside world.

The Tower Card Upright in a Tarot Reading
These days, when the Tower card appears upright in a reading, it means that a big change is coming that you should be prepared for. Sometimes this means a natural disaster, and sometimes death, but in most cases it is just a warning to be prepared for a major change in your environment.

In the case of my client for whom I was doing the Tarot reading, the Tower card indicated that he wasn't being aware of his surroundings. He needs to be more conscious of the Law of Accident at work around him. The Law of Accident says that if we don't have a strong intention and focus, then we fall prey to "accidental and coincidental" occurrences, like fender-benders. The Law of Accident is more at work during these times of extreme change than at other times. Luckily, nothing serious had happened to him, and he is going use some daily rituals to focus his intent and be more aware of his surroundings.

The Tower Card Reversed in a Tarot Reading
If the Tower appears as a reversed card in a Tarot reading, then the implications are different. If it's reversed, then you need to start looking at whether you have broken any Rules of the Road (the laws that govern magical practice) or whether there is something karmic going on. Maybe you've gotten crosswise with a deity.

If you see a reversed Tower card, do some exploration, through divination or possibly a blow-up Tarot reading, to find out what the situation is about. During this time of world upheaval, it's important to correct situations like this as quickly as possible. Luckily, the world is also much more plastic or flexible right now, so correcting situations may be easier than you think.

A Few Additional Notes About the Tower Card
The severity of the change or chaos indicated by the Tower isn't necessarily related to whether the Tower card is upright or reversed. Whether the card is upright or reversed merely tells you what kind of change you are dealing with. Remember that that Tower card represents changes appearing in the outer world, and often reflects deity-level changes. This card has shown up a lot in recent years, tying in with world and galactic changes. Changes indicated by the Tower card can be violent or drastic, and are simply a warning for us to be prepared. The Tower card isn't bad, it's just a warning to be aware.

Want to Learn More About the Tarot?
The Tarot is an infinitely deep study of magic. The Tarot can be used for divination, spells, spell take-downs, and many other forms of magic. If you would like to learn more about how to use the Tarot, consider joining our upcoming Basic Magic class or learning with our home-study Tarot Course.

If you enjoyed this post, please consider leaving a comment or subscribing to the feed to have future articles delivered to your feed reader.
Posted by Alan Joel at 6:38 AM
Email ThisBlogThis!Share to TwitterShare to FacebookShare to Pinterest
Labels: magic, reversed, tarot, Tower card, upright